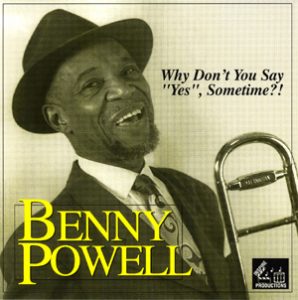 I am deeply saddened to report that Benny Powell passed away on June 26, 2010 in New York City while recuperating from back surgery. He was 80 years old. The jazz world has lost not only a great musician but also a wonderful human being.

The consummate sideman, trombonist Benny Powell (b. 1930, New Orleans, LA) spent three years with Lionel Hampton (1948-51) and twelve with the Basie band (1951-63). But those most illustrious associations are only part of the story. He was also a member of the Thad Jones-Mel Lewis Orchestra and worked with the orchestras of Duke Pearson, Bill Holman and Bill Berry as well as the Merv Griffin TV show ensemble. An amazingly versatile musician, he has participated in sessions involving artists across a wide range of styles and genres. In recent years, his work with pianist Randy Weston in smaller bands has been documented by a number of excellent recordings. He has also become deeply involved in jazz education at many levels and was on the faculty of The New School For Jazz and the Performing Arts.

Because of the large number of recordings involved, Powell’s discography is a massive undertaking. At the outset, I decided that some limitations in scope would have to be imposed. Thus I have chosen not to include here most of his sessions with Hampton and Basie as those are well known and details about them can be found elsewhere. For example, Powell’s Hampton period can be found in Vincent Pelote’s discography section of Hamp: An Autobiography by Hampton and James Haskins (Amistad Press, 1993) while the Basie years are comprehensively covered in Count Basie: A Bio-discography by Chris Sheridan (Greenwood Press, 1986). Instead, I have tried to emphasize the recordings of lower profile but still high quality that some jazz enthusiasts and collectors may have missed including those led by the trombonist himself.

Here are some recordings that Benny Powell participated in outside of the jazz genre for which thus far I have been unable to obtain sufficient details to enter into the discography:

On October 12, 2008, Benny Powell and his long time friend and colleague pianist Jane Jarvis were honored at the All Nite Soul event at Saint Peter’s Church in New York City. Many musicians, young and old, performed. (Jane Jarvis passed away on January 25, 2010.)