The following essay was written in the summer of 2020 to recognize the centennial of Charlie Parker, and was published in the November-December 2020 issue of The Duke Ellington Society (NY) Newsletter. Please consider joining the Society.

In late summer 2020, as we confront the health and economic consequences of a frightening pandemic, ever worsening weather due to climate change, systemic racism and an election in November that could determine the future of our system of government, it’s therapeutic to focus on something uplifting. So let’s consider the birth centennial of the great saxophonist Charlie Parker (August 29, 1920-March 15, 1955), also known as Bird and Yardbird. Like Duke Ellington, Louis Armstrong and a few others, Parker had a profound and enduring effect on the jazz legacy.

Parker was born in Kansas City, Kansas and emerged in 1940 in the band of pianist Jay McShann. The ensemble recorded in 1942 for Decca Records, but the Musicians Union recording ban starting that year largely curtailed opportunities for Bird’s artistic development to be documented in the studio. 1945 would be the breakout year for the saxophonist, who established the foundation for the new jazz genre called bebop through historic recording sessions for the Guild, Musicraft, Dial and Savoy record labels. In 1948, Parker began a productive collaboration with impresario and record company owner Norman Granz leading to even more jazz classics.

Along with Dizzy Gillespie and Thelonious Monk, Parker initiated a stylistic revolution that brought an end to the Swing Era and ushered in a radically new way of performing this music. Harmonic sequences were modified, solos took on a less rigid phrasing approach and rhythm sections were freed to support tempos sometimes over 300 beats per minute. New melodies (contrafacts) were created based on the chord structures of well-known tunes. After Parker and his fellow innovators came to prominence, jazz transitioned from dance music to concert music performed mainly by small ensembles rather than big bands.

Grounded in the blues, Parker’s style combined soul with technical brilliance. While some jazz performers came close, few shared his ability to create improvised solos that were near-perfect musical compositions. His influence on saxophone players of the 1940s and 1950s was dominant, extending into the 1960s when the music experienced another major change of direction led by artists like John Coltrane, Eric Dolphy and Ornette Coleman.

As the centennial is celebrated, one might wonder whether the trajectories of Parker and Duke Ellington ever intersected. It appears that the two titans never recorded together and the only instance of the two performing together involves an Ellington appearance in New York City, in February 1953, where Parker sat in with the rhythm section playing some standard tunes while the band provided impromptu backgrounds. (Source: Interview with saxophonist Steve Lacy, DownBeat, July 2004; Brian Priestley, Chasin’ the Bird: The Life and Legacy of Charlie Parker, Oxford University Press, 2007, p. 93, 219.) 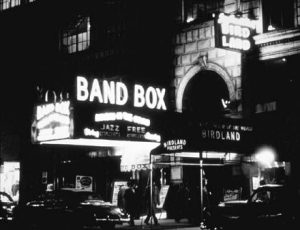 The Ellington band was in residence at Bill Levine’s Band Box club on Broadway, between 52nd and 53rd Streets, from January 30 to February 15, 1953, during which time some personnel turnover occurred. On January 29, bassist Wendell Marshall left temporarily and was replaced by Charles Mingus, but the volatile Mingus was fired a few days later by Duke after an altercation with Juan Tizol. Mingus’ replacement was none other than the great Oscar Pettiford. In the reed section, Paul Gonsalves left on February 3 to do two weeks with Tommy Dorsey and was replaced by Tony Scott. (Source: The Duke: Where and When.)

Parker’s appearance with the band took place on the last night of the engagement, February 15, and Lacy’s eyewitness account reveals that Bird performed “Honeysuckle Rose,” Tea for Two” and a blues. Ellington, Pettiford and Louie Bellson would have comprised the rhythm section. The next day, Parker appeared at the same venue with the Bill Harris-Chubby Jackson Herd.

Throughout Parker’s all too short career, his repertoire was a combination of original bebop compositions like Dizzy Gillespie’s “A Night in Tunisia,” numerous blues lines, pop tunes and the aforementioned contrafacts so popular with the beboppers. Some examples of these are “Ornithology,” based on the chords of “How High the Moon,” “Yardbird Suite,” very close harmonically to “Rosetta” and “Scrapple from the Apple,” borrowing from both “Honeysuckle Rose” and “I Got Rhythm.”

But recordings of compositions from the Ellington/Strayhorn orbit are rare in Parker’s discography. A jam session on May 23, 1948 in Washington, DC features a 6-chorus Parker solo on “C Jam Blues.” The only other example appears to be “Caravan,” covered at a Machito big band session for Norman Granz in January 1949, and by the saxophonist’s small ensembles live in 1951 and 1953. Surprisingly, the Bird with Strings sessions for Granz that took place on November 30, 1949 and July 5, 1950 utilized a number of well-known pop and show tunes but nothing from the pen of either Ellington or Strayhorn. It should be noted that Mercer Ellington wrote an arrangement of his “Moon Mist” for the Bird with Strings sessions but it was not recorded. The score is stored at the Institute of Jazz Studies in Newark, NJ. (Parker asked Mercer to be his road manager but the latter refused because of the saxophonist’s drug problems. Source: Mercer Ellington and Stanley Dance, Duke Ellington In Person, An Intimate Memoir, Houghton Mifflin, 1978.)

In finding points of overlap involving the creative output of Ellington and Parker, it is worthy of mention that both recorded original compositions titled “Ko-Ko” (or “Ko Ko”) at sessions of historical significance. Duke’s “Ko-Ko” is a 12-bar blues in E-flat minor unveiled at the March 6, 1940 Victor session featuring the innovative Blanton-Webster band, a session that also produced “Jack the Bear” and “Morning Glory.” Solos are by Tricky Sam Nanton, Ellington and briefly, Blanton.

Parker’s “Ko Ko” debuted at the momentous November 26, 1945 quintet session for Savoy Records that also gave us the often-performed blues lines “Billie’s Bounce” and “Now’s the Time.” “Ko Ko” is essentially the chords of Ray Noble’s “Cherokee” preceded by an unusual, partially improvised introduction that is repeated as a coda after Max Roach’s drum solo. But Parker’s two chorus alto saxophone solo on the challenging 64-bar “Cherokee” harmonic structure, taken at a very fast tempo, represents a milestone in the evolution of bebop and set a standard for aspiring musicians to attain. If you can’t negotiate “Cherokee,” you’d better go back to the woodshed!

On p. 316 of his Parker biography, Bird Lives! The High Life and Hard Times of Charlie (Yardbird) Parker, (Charterhouse, 1973), Ross Russell presents an interaction, most likely apocryphal, that took place between Parker and Ellington around 1953 in which Duke offers Bird a job with his band at a salary of $350/week. The saxophonist rejects this proposal insisting on a weekly salary of $800 that Ellington refuses to meet. Russell’s book is a fascinating read, but over the years, many inaccuracies have been noted and this account probably should be taken with a grain of salt.

Yet the idea of Parker playing in Ellington’s orchestra is intriguing. Johnny Hodges left Ellington from 1951-1955 and was replaced by Willie Smith then Hilton Jefferson and finally Rick Henderson. Could Parker have taken Hodges’ chair, joining Russell Procope, Gonsalves, Jimmy Hamilton and Harry Carney to form a saxophone section of exceptional stylistic diversity? It’s entertaining to speculate, but for all of Bird’s creative genius and technical prowess, he was plagued by a brutally unhealthy lifestyle and heroin addiction. It seems highly doubtful that he would have been able to meet Duke’s standards. And at this point he had already achieved iconic status seemingly incompatible with the role of sideman in a big band, even that of Ellington.

Regarding Parker and Hodges, they made one recording together, a Norman Granz studio jam session in Hollywood, on June 17, 1952. The all-star lineup also included Benny Carter on alto saxophone, Ben Webster and Flip Phillips on tenor saxophone and Charlie Shavers on trumpet. What is so striking about this recording is the instantly recognizable sound and conception of the five saxophone giants who, along with Shavers and the rock solid rhythm section of Barney Kessel, Oscar Peterson, Ray Brown and J.C. Heard, perform a slow blues in C, a fast blues in B-flat, “What Is this Thing Called Love” and a ballad medley in which Hodges covers “I’ll Get By” and Parker, “Dearly Beloved.”

Charlie Parker packed an enormous amount of music into a life that, tragically, lasted only 34 years. Perhaps his most significant overlap with Duke Ellington is the dominant influence they both exerted on the evolution of jazz as an art form. Ellington spent half a century creating a huge body of widely performed songs and suites and leading an orchestra with a unique sound that reflected the individuality of its members. Parker helped create a genre of jazz that altered and broadened forever the improvisational palette. Without their innovations, the jazz world of today would be a far less interesting place.

Many thanks to Carl Woideck (author of Charlie Parker: His Music and Life, University of Michigan Press, 2020), Vincent Pelote and Lynne Mueller.