BRIAN is a relational data base application, created by Steve Albin, used to compile standard discography information. Named after Brian Rust, who perfected the chronological recording session format for print discographies, the application tracks every aspect of a record date, from sidemen to songs to composers to releases. All of the important pieces of data are instantly cross-referenced and searchable.

I have been working with Steve and Mike Fitzgerald to perfect this program, broaden its capabilities and make it an ever more powerful tool for jazz researchers and historians. For more information on Brian and to download the program, visit JazzDiscography. It’s available in both Windows and Mac versions.

On March 11, 2004, the following paper, including a demonstration, was presented at the 2004 joint Conference of the Association for Recorded Sound Collections (ARSC) and the Society for American Music (SAM) in Cleveland, OH, in a session on “Discography In the 21st Century:”
Brian: A Relational Database Application for Discographers
by Noal Cohen, Steve Albin and Michael Fitzgerald

On May 18, 2006, the following paper was presented at the 40th annual conference of ARSC in Seattle, WA:
Progress and Problems In Modern Day Discography
by Noal Cohen 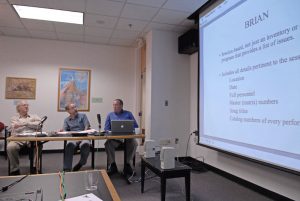 On September 19, 2007, Steve Albin and I gave a presentation at the Institute of Jazz Studies, Rutgers University in Newark entitled Progress and Problems In Modern Day Discography in which we discussed advances in the use of BRIAN to create jazz discographies and store data. Shown is a photo from that research roundtable.