Earlier this year, SteepleChase Records released a new CD by the New York City-based saxophonist, composer, arranger Chris Byars. Entitled A Hundred Years from Today, this album features 9 original compositions, each a tribute to one of his musical heroes. 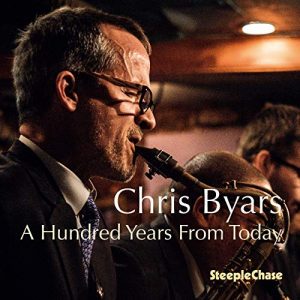 I was honored to be asked to write the liner notes for this CD which are reproduced below. It is my sincere hope that my comments will inspire you to purchase a copy of the album if you have not already done so. Trust me, you will discover some outstanding, original music performed by an ensemble made up of some of New York’s finest jazz artists.

A Hundred Years from Today

As these notes are being written, saxophonist/composer/arranger/bandleader/educator Chris Byars is training for the New York City Marathon. One might wonder how a musician as busy as he is finds the time to prepare for such a daunting physical challenge, but he approaches fitness, exercise and nutrition with the same passion and dedication that he applies to his artistic endeavors. A Certified Health Coach, he is also very willing to assist others in improving their situations by lifestyle modification.

Byars is unusual in other ways as well. He has a keen sense of jazz history and an appreciation of many of the earlier contributors to this music who, sadly, are too often forgotten. These include saxophonists Lucky Thompson, Frank Strozier and Gigi Gryce, pianists Duke Jordan and Freddie Redd and vibraphonist Teddy Charles. Several of his Steeplechase albums have been tributes to these giants who gained prominence in the 1950s.

He is also a “jazz ambassador,” having performed for over a decade in dozens of countries all over the world, under the auspices of the U.S. State Department, where he has successfully used music to establish bridges with citizens of nations often having fraught relations with America. And in 2017, he was commissioned by the WDR (West German Broadcasting) Big Band to write arrangements for a Thelonious Monk centennial celebration (“Monk at 100”) held in Köln, Germany.

For his tenth Steeplechase project, Byars returns to the historical approach, but this time, from a somewhat different perspective. Here, instead of reexamining the compositions of his idols, he has chosen to pay homage to them through original works, nine, in fact, newly crafted for this album. Through efforts like this, it is his sincere hope that the musical legacies of these geniuses will still be recognized, as the album’s title suggests, a hundred years from today.

He has also assembled a somewhat different ensemble than in previous outings, a sextet with four horns and no chord instrument. The unusual horn array comprises alto and tenor saxophones (the leader is heard only on tenor), bass clarinet and trombone, and he calls the ensemble the “Original Chris Byars Sextet” because the material created for it is made up of almost entirely original pieces. This format was the result of several factors, not the least of which was the inability of a long time collaborator to record because of contractual obligations. But Byars has converted lemons to lemonade by capitalizing on the challenge he faced and creating a new, open sound with backgrounds and interludes filling in perfectly for the absence of a piano or guitar. As he puts it, “…without a comping instrument, there needs to be a harmonic background provided by the horns, especially since the material is all new. Without some accompaniment, the originals would take on a ‘free jazz’ sound rather quickly, and lose their distinctiveness. For the arranging, I did not rely on any specific historical precedent. I just tried to stay true to the tune and to what the listener needs to maintain interest.”

As collaborators on A Hundred Years from Today, Byars has chosen several long time New York City associates. The highly regarded trombonist John Mosca is a seasoned veteran, at home in a variety of musical settings. He joined the Thad Jones-Mel Lewis Orchestra in 1975 and has been an integral part of its successors, the Mel Lewis Orchestra and the Vanguard Jazz Orchestra. He can also be heard on recordings of the Buddy Rich, Al Porcino, Jimmy Heath and Don Sebesky bands. Byars and Mosca first recorded together in 1997 in the ensemble “Across 7th Street” for a compilation called Jazz Underground – Live at Smalls (Impulse).

A son of the great bassist Jamil Nasser (née George Joyner) and brother of trumpeter and flugelhornist Muneer Nasser, alto saxophonist Zaid Nasser comes from a distinguished musical family and benefited at an early age from exposure to some of the most influential musicians in New York City including saxophonists George Coleman and Junior Cook and pianists Frank Hewitt and Harold Mabern. His first recording took place in 1983 with drummer Panama Francis and the Savoy Sultans. He is also heard on the aforementioned Jazz Underground album and has produced two albums as leader for the Smalls label, Escape from New York and Off Minor. His most recent effort is The Stroller, a quartet session recorded in 2016 for Steeplechase (SCCD 31833). Throughout A Hundred Years from Today, Nasser’s alto saxophone is the lead horn.

From the town of Feltre in Northern Italy and a graduate of the Conservatory of Bologna, bass clarinetist Stefano Doglioni came to New York City in 2011 and since then has impressed musicians and audiences alike with his facility on the instrument. He is unusual in that the bass clarinet, generally a double, is his preferred and only woodwind. He can be heard on several Steeplechase albums under the leadership of Byars and Freddie Redd.

Bassist Ari Roland and Byars have a relationship now 32 years in duration. They have not only performed and recorded together on many occasions but have also traveled the world on the aforementioned State Department sponsored tours. And they are both native New Yorkers. Roland is known for his almost exclusive preference for arco (bowed) solos, delivered with great facility, no matter the tempo, and modeled on horn players rather than bassists. He has recorded with pianists Frank Hewitt and Sacha Perry and has three albums as leader on the Smalls label, Sketches from a Bassist’s Album, And So I lived in Old New York and New Music.

A native of Toronto, Ontario, drummer Phil Stewart moved to New York City in 1998 and along with his brother, saxophonist Grant Stewart, has firmly established himself on the city’s jazz scene. His first recording took place in 1996 with a Toronto-based band led by pianist Ken Skinner called the Jazzmongers. Since then he has recorded with brother Grant, Zaid Nasser, Byars, pianists Sacha Perry and Ehud Asherie and others. His first album as leader was recorded in 2017 for the Cellar Live label and is called Melodious Drum.

As for the performances, Intention is a tribute to saxophone great Lucky Thompson (1923-2005) who once told Byars, “I don’t care what you play. I care whether you mean it.” It utilizes a variation of the chord structure of the standard What’s New stretched out over 64 bars. The tempo is brisk and the soloists are Nasser, Mosca, Byars, Doglioni, Roland and Stewart. It’s interesting to note that Thompson himself composed a contrafact on What’s New entitled Translation, recorded in 1956 for ABC Paramount.

The title song, A Hundred Years from Today, was composed in 1933 and is most closely associated with the influential trombonist and vocalist Jack Teagarden who recorded it that same year (Brunswick) and four times thereafter. The version by Ethel Waters and Benny Goodman, also recorded in 1933, was a hit for Columbia Records. Other notable covers of the tune are those by Sarah Vaughan (1946), Lee Wiley (1958), Jimmy Cleveland (1958) and Frank Sinatra (1984). Here it is given a walking ballad treatment with the melody stated by trombone and bass clarinet. Solos are by Byars, Nasser, Mosca (bridge) and Doglioni. After a soli section, Roland has the bridge to himself and Stewart engages in a brief call and response with the ensemble.

San Juan Hill was composed in honor of Thelonious Monk (1917-1982) and has an unusual 34-bar (8+9+8+9) structure. The title refers to the section of Manhattan where the pianist was raised and allusions to the bebop genius are apparent in this medium tempo performance. The soloists are Byars, Mosca, Nasser, Doglioni and Roland while Stewart trades fours and twos with the ensemble.

Tadd Dameron (1917-1965) was an important contributor to the bebop revolution of the 1940s and a composer whose strong melodic tendencies influenced musicians of the following decade including Benny Golson and Gigi Gryce. Byars’ remembrance of Dameron, Money Can’t Buy, a lovely ballad, is a fitting one, and the title a reminder that originality is not an item of commerce. The song has a 34-bar (8+8+8+10) structure and solos are by Byars, Doglioni, Nasser, Mosca and Roland.

The only living subject honored by Byars on this album, pianist Freddie Redd (b. 1928), is another composer of wonderful melodies and the subject of three Steeplechase albums, Music Forever (SCCD 31743), an earlier Byars tribute, Music for You (SCCD 31796) and With Due Respect (SCCD 31817), the latter two led by Redd himself. He is best known for composing the music for and performing in the play, “The Connection.” Not surprisingly, Byars’ composition, All the Things Are Redd, has a harmonic relationship to Jerome Kern’s All the Things You Are. The solo order is Byars, Nasser, Mosca, Doglioni and after a soli chorus, Roland has his opportunity before the horns engage in 4-bar exchanges with Stewart.

Drummer Jimmy Lovelace (1940-2004) served as mentor to several of the members of Byars’ sextet and was noted for his seemingly effortless mastery of fast tempi. Lovelace, having a chord sequence close to that of Tune Up, is taken at a breakneck pace, set off by Stewart’s introduction. The facile solos are by Mosca, Nasser, Doglioni, Byars, Roland and Stewart.

Pianist Bud Powell (1924-1966) was another bebop pioneer and one whose playing manifested unrivaled intensity. Byars’ tribute piece is entitled Elevated Tracks, a reference to the omnipresent railroad sounds the pianist heard growing up in Harlem, and features solos by Nasser, Mosca, Byars, Doglioni and Roland. After 4-bar exchanges among the horns, Stewart has a chorus to himself.

No album of this type would be complete without homage to Charlie Parker (1920-1955). Byars gives us Flight, based harmonically on Bird’s Confirmation, with the theme presented by tenor sax, trombone and arco bass in unison. Nasser leads off the soloing in Bird-inspired fashion followed by Mosca, Byars, Doglioni, Roland and Stewart.

Another alto saxophonist prominent on Byars’ historical radar is Gigi Gryce (1925-1983), also a great composer and arranger. The title of this tribute, Incognito, references the fact that Gryce left music in the early 1960s but reemerged as a respected teacher under another name, Basheer Qusim. This memorable 32-bar opus features solos by Nasser, Doglioni, Byars, Mosca and Roland. Following a soli chorus, Stewart is front and center.

The final artist Byars has chosen to remember is Dizzy Gillespie (1917-1993) who, like Parker, Powell and Monk, occupies a lofty position in jazz history. Appropriately titled, the brisk and blues-tinged Mountain Top has a 36-bar (8+8+8+12) structure with Doglioni leading off the solos. He is followed by Nasser, Mosca, Byars and Roland. Stewart has 4-bar breaks on the shout chorus before taking one of his own.

In this album, Byars sets forth the concept that a very effective way to preserve the legacies of jazz giants is to assimilate their artistic attributes into one’s own compositions. While the well-known jazz standards left to us by these iconic figures will certainly continue to be performed, the original music heard here cogently exemplifies his approach and leads us to hope that it will be explored by others going forward.

Oh, and we wish him well with the marathon.

Other Steeplechase CDs by Chris Byars: 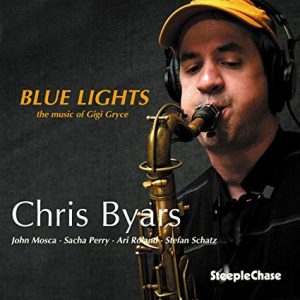 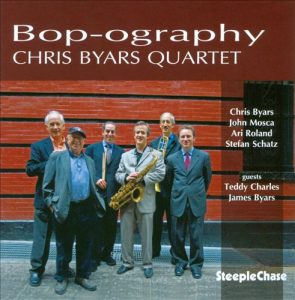 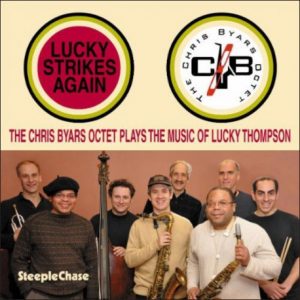 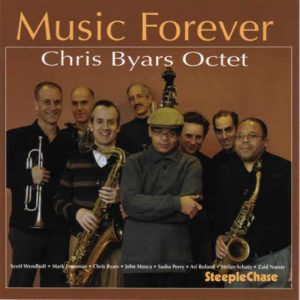 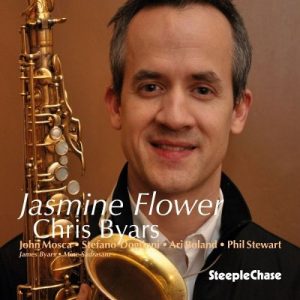 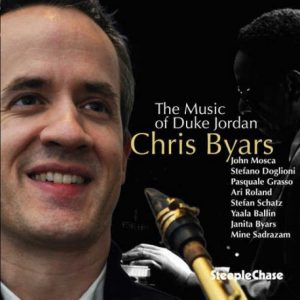 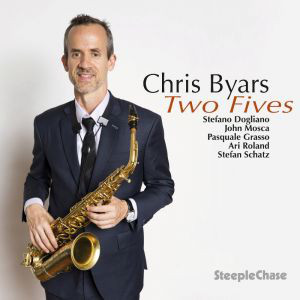 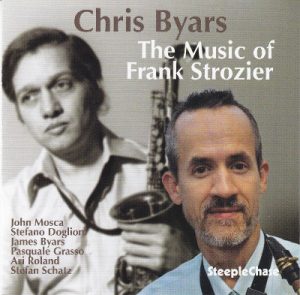 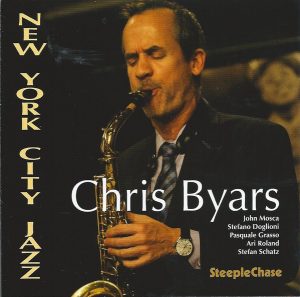