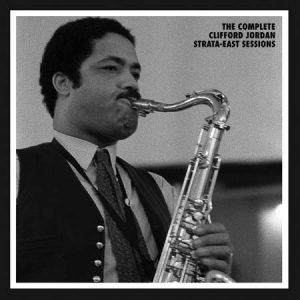 Clifford Jordan’s discography is a natural outgrowth of my work on Art Farmer. These giants worked together early in their careers and again in their final years and always complemented each other beautifully. Having the Farmer sessions already in my database gave me a leg up and my friend and collaborator Michael Fitzgerald was generous in letting me import many Jordan sessions from his BRIAN database. For several years Michael has maintained a Clifford Jordan leader discography which has been incorporated into the one found here.

Jordan is one of those recognizable saxophonists with a commanding sound and conception that make the listener sit up and take notice. I hear in him elements of Dexter Gordon, Lucky Thompson and John Coltrane that are melded in a unique way so as to move into adventurous territory while, at the same time, maintaining a strong connection to the hard bop approach from which he emerged. The discography includes a wide variety of music varying from commercially oriented material to avant-garde exploration demonstrating both Jordan’s versatility and willingness to challenge boundaries. He was also a fine composer and many of his nearly 100 pieces have unusual forms. 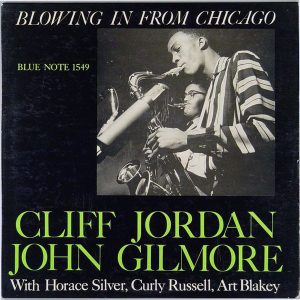 Jordan’s first commercial recording took place in 1957 when he was 25, and on it, he shared leadership with John Gilmore. Blowing in from Chicago was issued on the prestigious Blue Note label and the new additions to the New York scene were backed by the stellar rhythm section of pianist Horace Silver, bassist Curly Russell and drummer Art Blakey. Gilmore spent most of his career with the legendary composer and bandleader Sun Ra (Herman Blount; 1914-1993) while Jordan’s oeuvre is much more diverse.

For the Blue Note label, Jordan made two more albums as leader, Cliff Jordan and Cliff Craft and as sideman with bassist Paul Chambers and pianist Sonny Clark, all in 1957, and with Horace Silver in January 1958. Then it was on to sessions with trumpeter Lee Morgan (Vee-Jay) and trombonist J.J. Johnson (Columbia).

His next outing as leader was a quartet session for Riverside Records with pianist Cedar Walton who would become a frequent associate and like Jordan, was a talented composer. The album Spellbound was followed by A Story Tale and Starting Time, all of which cemented his position as one of the most promising saxophonists on the scene and attracted the attention of master drummer Max Roach with whom he worked and recorded from 1961 to 1964.

Another important connection was the groundbreaking multi-instrumentalist Eric Dolphy with whom Jordan recorded in 1963. Both joined Charles Mingus’s Jazz Workshop sextet in 1964, which ensemble also included trumpeter Johnny Coles, pianist Jaki Byard and drummer Dannie Richmond. The talented band embarked on a tour of Europe that was fraught with problems, not the least of which was Coles collapse during a concert in Paris requiring an extended hospital stay. Many recordings of these concerts were made, most unauthorized, and the large number of issues of varying quality that resulted present discographical challenges.

The mid-1960s found Jordan aligned with Atlantic Records leading to the albums These Are My Roots: Clifford Jordan Plays Leadbelly and Money in the Pocket under pianist Joe Zawinul’s leadership. But Jordan had plans for his own record label and in early 1968, after completing a tour of Africa with Randy Weston, he announced the formation of Frontier Records. Unfortunately, although several recording sessions took place, nothing was ever issued under the Frontier label. Instead, this material was released by Strata-East, a label founded by trumpeter Charles Tolliver and pianist Stanley Cowell. These often ground breaking sessions, including Jordan’s highly regarded In the World and Glass Bead Games, were reissued in 2013 by Mosaic Records as The Complete Clifford Jordan Strata-East Sessions. Here is a flyer from 1974 publicizing these two albums: 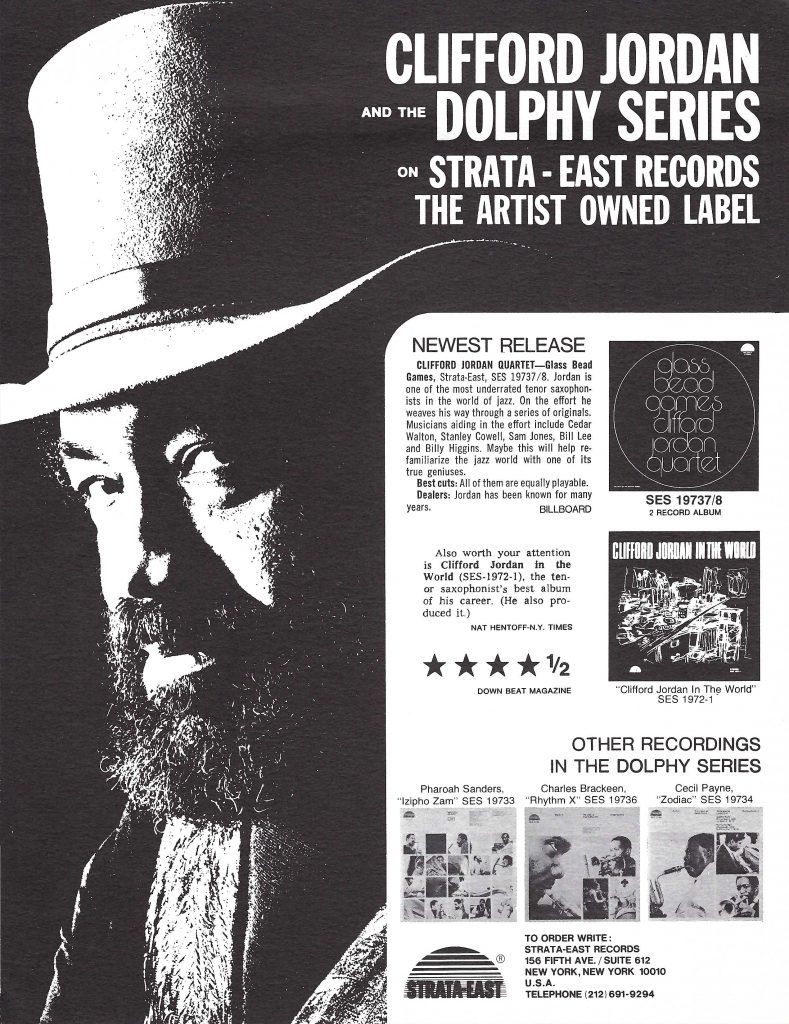 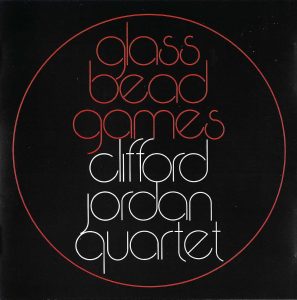 Throughout the 1970s, Jordan made many studio and live recordings in Europe and the USA for the Muse and Steeplechase labels. He and Art Farmer reunited in 1976 for Art Farmer Quintet at Boomers, the first time the two had recorded together since a Horace Silver session in 1958 (Further Explorations by the Horace Silver Quintet). They continued to work together producing a number of excellent albums: 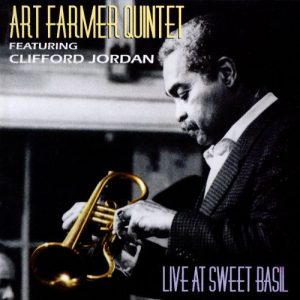 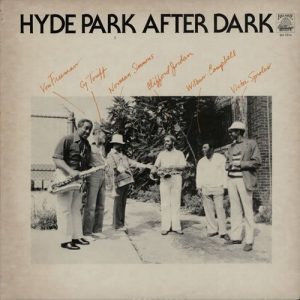 Mention must be made of the recordings Jordan made for Bee Hive Records, a Chicago label started in 1977 by Jim and Susan Neumann and named for a local club. These include Dr. Chicago with trumpet icon Red Rodney (1985), Hyde Park After Dark (1983) with Chicago legends Von Freeman and Cy Touff and a 1978 sextet session led by trumpeter Dizzy Reece (Manhattan Project). All of these were reissued in 2015 on the Mosaic Records compilation, The Complete Bee Hive Sessions.

In the 1990s, Jordan assembled a New York City big band with arrangements by the leader, Dizzy Reece, Don Sickler, John Nealy, Julian Priester and Charles Davis. The ensemble made two live albums, Play What You Feel (1990) and Down Through the Years: The Clifford Jordan Big Band Live at Condon’s (1992).

This introduction only scratches the surface of Jordan’s 35-year career. There are excellent recordings with Charles McPherson, Junior Cook, David ‘Fathead’ Newman, Carmen McRae and Dameronia to name just a few. I encourage you to spend some time with the discography and get back to me with any additions, corrections or comments.

A “Tribute to Clifford Jordan” was held at the Cutting Room in New York City on Sunday, September 11, 2022. This event, featuring an outstanding quintet, was produced by VTY Jazz (Arnie Perez). 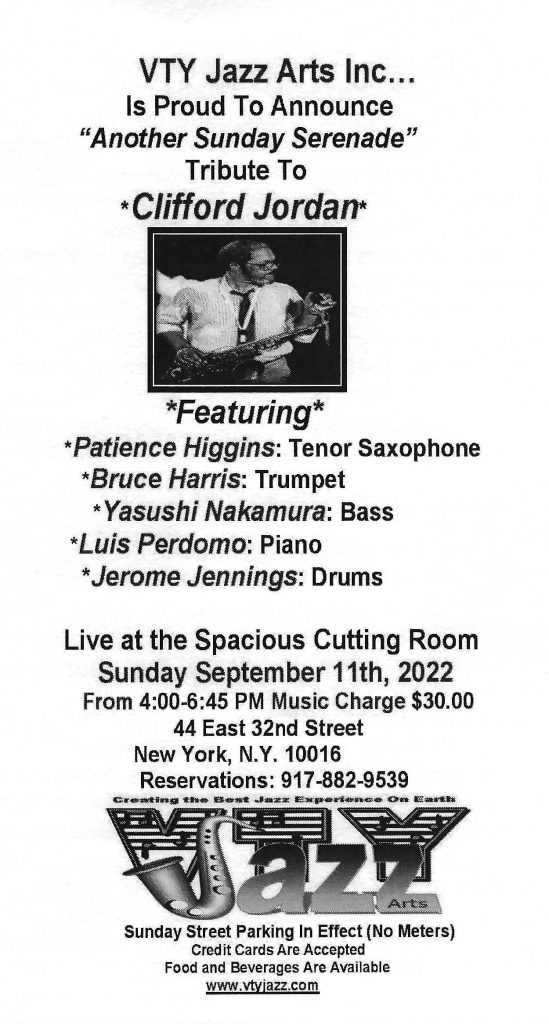 Sources of Information on Clifford Jordan:

There are several albums that I have been unable to access because of availability, cost or archive shutdowns caused by the COVID-19 pandemic. If anyone is in possession of any of the following, please contact me. Thanks.