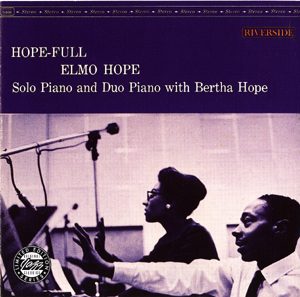 The pianist and composer, Elmo Hope (1923-1967) was one of the most gifted and original artists of the hard bop period. He was a close childhood friend of both Bud Powell and Thelonious Monk and frequently interacted with these giants in the 1940s when the bebop innovations were being formulated and refined. Early in his professional career he served apprenticeships in various R&B bands, not emerging as a jazz recording artist until 1953. During the period 1953-1966, he performed and/or recorded with a host of jazz greats including Sonny Rollins, Clifford Brown, John Coltrane, Jackie McLean, Harold Land, Chet Baker, Frank Foster, Philly Joe Jones and served as leader on several outstanding sessions for the Blue Note, Prestige and Riverside labels. He was one of the few musicians to establish himself as an important figure of the hard bop school on both the East and West Coasts. Hope also left a substantial legacy of intriguing and memorable compositions and must be ranked highly among the many talented composers of his period including Benny Golson, Gigi Gryce, Charles Mingus, Horace Silver, Herbie Nichols, Kenny Dorham, Randy Weston and Hank Mobley. 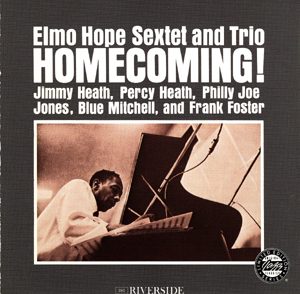 Because of Hope’s premature demise at the age of only 43, his discography is not an extensive one. Nonetheless, it must be noted that several of the recordings on which he participated either as leader or sideman have been consistently available over the years through domestic and foreign reissue programs and are considered classics. Check out Derek Taylor’s online article, Saint Elmo’s Fire, analyzing the Hope reissues available through the Concord Music Group (formerly Fantasy Records) catalog.

See Jazz Injustice: Genius In the Shadows by Robert Palmer, from 1987.

The music of Elmo Hope is being kept alive through an ensemble called ELMOllenium, led by his widow, pianist Bertha Hope. Small ensemble arrangements of Hope’s compositions, “Barfly,” “Boa,” “Low Tide,” “One Down,” “So Nice” and “Something for Kenny” are available from Hal Leonard Corp. while lead sheets of several of his compositions can be downloaded from Jazz Lead Sheets.

On September 10, 2016, Lyman Place in the Bronx, where Hope grew up, was renamed Elmo Hope Way.

Thanks to Horst Moller, Michael Weil, Dave Stalker, Jack Woker, Eric Reed, Peter Grendysa, Vincent Bessieres, Bob Porter, Michel Ruppli, Alex Hoffman, Jim Harrod and Steve Wolff for providing information on Hope’s recordings. And special thanks to Bertha and Monica Hope for their interest in and support for this project.