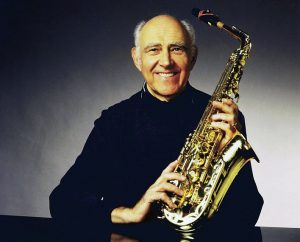 I’m sorry to have to report that Herb Geller passed away on December 19, 2013 in Hamburg, Germany. He was 85 and had been suffering from lymphoma and pneumonia. Herb had a great run and left us a significant legacy. He will be missed by all who knew him and his music.

When I first got into jazz in the early 1950s, the “West Coast” school was very much in vogue. There were a number of fine musicians based in Los Angeles at the time who were recording prolifically and garnering accolades from the critics. Prominent among these were alto saxophonists Art Pepper, Bud Shank, Buddy Collette and Lennie Niehaus. While all richly talented players, it was another who really caught my attention and that was Herb Geller. To me, Geller’s playing was more vital and moved me in a way the others didn’t. He made several notable recordings for the Emarcy label in 1954 and 1955, often in the company of his wife, Portland, Oregon-born pianist Lorraine Walsh Geller who died tragically at the age of only 30 in 1958 due to pulmonary edema.

Geller was born in Los Angeles on November 2, 1928 and while still in his teens, was playing professionally. He paid his dues touring and recording with big bands including Jerry Wald, Claude Thornhill and Earle Spencer. After returning to LA in 1952, he quickly became a part of that milieu recording with Shorty Rogers, Chet Baker, Maynard Ferguson and many others. In 1962 he relocated to Europe, ultimately settling in Hamburg, Germany where, for 28 years, he was on the staff of the Norddeutschen Rundfunk (NDR).

Over the years, Geller has recorded and appeared widely in the USA and Europe and although his style has certainly evolved, it retains the beautiful tone and emotional impact that I originally had found so appealing. Some of his finest work can be found on sessions for the Enja, Fresh Sound and Hep labels recorded between 1986 and 2007.

Geller’s improvisational style emphasizes musicality, taste and lyricism undoubtedly derived from one of his main influences, the legendary Benny Carter. His solos, like those of many of the greatest jazz players, are constructed compositionally, relying on form rather than patterns. In addition to the alto saxophone, he also has mastered the difficult soprano sax as well as flutes and other woodwinds. A prolific composer, he has contributed a number of appealing pieces, one of my favorites being the haunting bossa nova “Landscape.”

The recorded history of Herb Geller is extensive involving some of the finest musicians in Europe and America and a variety of genres. In order to bring some order to this complex project, I have chosen to divide the discography into two sections, Part 1, 1949-1961 and Part 2, 1962-2013. During his nearly three decades at NDR, he recorded frequently with the NDR Bigband (originally the NDR Studioband) and many of these sessions can be found in part 2 of the discography. Unfortunately, despite having access to the NDR archives, I am able to include only a portion of his enormous NDR legacy because vital data was not retained by the radio network.

One final caveat involves sessions outside of the jazz genre. Geller participated in many throughout his career and they are very hard to track down (even harder to obtain detailed discographical information). In many instances, his involvement was simply to overdub a saxophone or woodwind part to an existing track. Here is a list of some issues not found in the discography to which Geller contributes: