In many ways, Frank Strozier is a mystery wrapped in an enigma. Although highly regarded by his peers, he stopped playing saxophone and flute in the 1980s, made a brief stab at a piano career in 1990 (his first instrument) and has not been heard from since. Rumors abound as to his fate, including allegations that he is deceased. As far as I have been able to ascertain, this is not true – at least, up to the time of this writing, I have found no obituaries. At the same time, however, his current status and whereabouts seem to be unknown to anyone, even his longtime associates.

One perhaps unfortunate but typically American source of controversy is Strozier’s race. Anecdotally, many people have assumed from his appearance on albums that he is white. But according to his Memphis colleagues, he is African-American. Photographer Ernest C. Withers, who documented the Memphis music scene in “The Memphis Blues Again: Six decades of Memphis Music Photographs,” Daniel Wolff, Ed., Viking Studio/Penguin, New York, 2001, displays on p. 55 a photo of a young Strozier, ca. 1952 (age 14 or 15), wearing his high school band uniform and holding his alto sax, with the following commentary:

Strozier graduated from high school in Memphis (where he was born in 1937) then moved to Chicago in 1954. He eventually played be-bop sax with Miles Davis, among many others.

He’s in his high school uniform then, but he’s quite an adult now. Frank Strozier was a great saxophonist, and he rose to national popularity. His father was a pharmacist. He was from the early Rhythm Bombers, a little younger than Phineas Newborn. He played on my ball team when I was on the police force.

Nearly all the subjects in Withers’ photos are African-American, a notable exception being Elvis Presley. The Rhythm Bombers were the band of segregated Manassas High School in Memphis, under the direction of W.T. McDaniel, of which many of the city’s future black musical stars were members. Like Newborn, Strozier was clearly a prodigy, recording with vocalist/drummer Houston Stokes for Sun Records while still in his teens.

Strozier’s last recording as a leader was the 1977 album What’s Goin’ On for the Steeplechase label. After that he performed and/or recorded with trumpeter Danny Moore, drummers Louis Hayes and Jim Schaepperoew, bassists Stafford James and Stephen Roane, guitarist Kazumi Watanabe, vocalist Mari Nakamoto, and made several appearances with the George Coleman octet. The last instance of Strozier performing on saxophone that I have been able to document is a bootleg recording of the Coleman ensemble in Hartford, CT in July 1984. Then in 1990, he made his debut as a pianist leading a trio in a concert at Weill Recital Hall in New York City, but after that, nothing!

It has been reported that Strozier became a math and/or science (not music) teacher in Westchester County, NY. Nick Catalano, in his book “New York Nights: Writing, Producing and Performing in Gotham,” iUniverse, Bloomington, IN, 2009, indicates on p. 122 that the saxophonist obtained a teaching certificate in 1971 and that he began teaching in the Yonkers, NY public schools. This early date is surprising since at the time, Strozier was still very active musically. In fact, in 1971 Strozier was an adjunct faculty member at Paterson State College (now William Paterson University) in Wayne, NJ and director of the College Jazz Ensemble (see photo below). He would be replaced the following year by Thad Jones. Also, in 1971, Strozier won the Talent Deserving Wider Recognition award in DownBeat Magazine’s International Critics Poll.

Catalano further asserts that Strozier’s decision to make piano his primary instrument occurred in 1982, yet his debut on the instrument didn’t occur until 8 years later.

Why did Strozier stop playing? One theory that has circulated involves his frustration with being unable to secure high quality reeds. Certainly reed selection and procurement are major considerations for most saxophonists and other woodwind players as well. But it seems a stretch to believe that this factor alone was responsible for his jettisoning a successful career. It has also been speculated that he just became fed up with the music business and its failure to consistently reward excellence and creativity.

For many years I have attempted to make contact with Strozier with the goal of carrying out an in depth interview that might shed light on the questions that surround him. All my approaches have been ignored as have those of others, even his longtime musical colleagues. He seems to have basically cut himself off from his musical life. So at this point in time, we know little about why one of the most original and technically proficient saxophonists of the post-bop era walked away from what should have been a long and productive career. Fortunately, he left us a substantial body of recordings to study and enjoy.

From time to time I get inquiries about Strozier, once someone wondering where to send royalties. If anyone has confirmed recent information about him, please let me know.

Here is an excerpt of “Mass Ave Swing” (Sonny Stitt) from a live Strozier quartet performance in 1976 (Many thanks to saxophonist Frank Basile for catching my error in originally calling this tune “Rhythm-A-Ning” (Thelonious Monk). The two “I Got Rhythm” contrafacts are similar, but this is definitely the Stitt tune.):

Here are some flyers promoting Strozier appearances between 1970 and 1990: 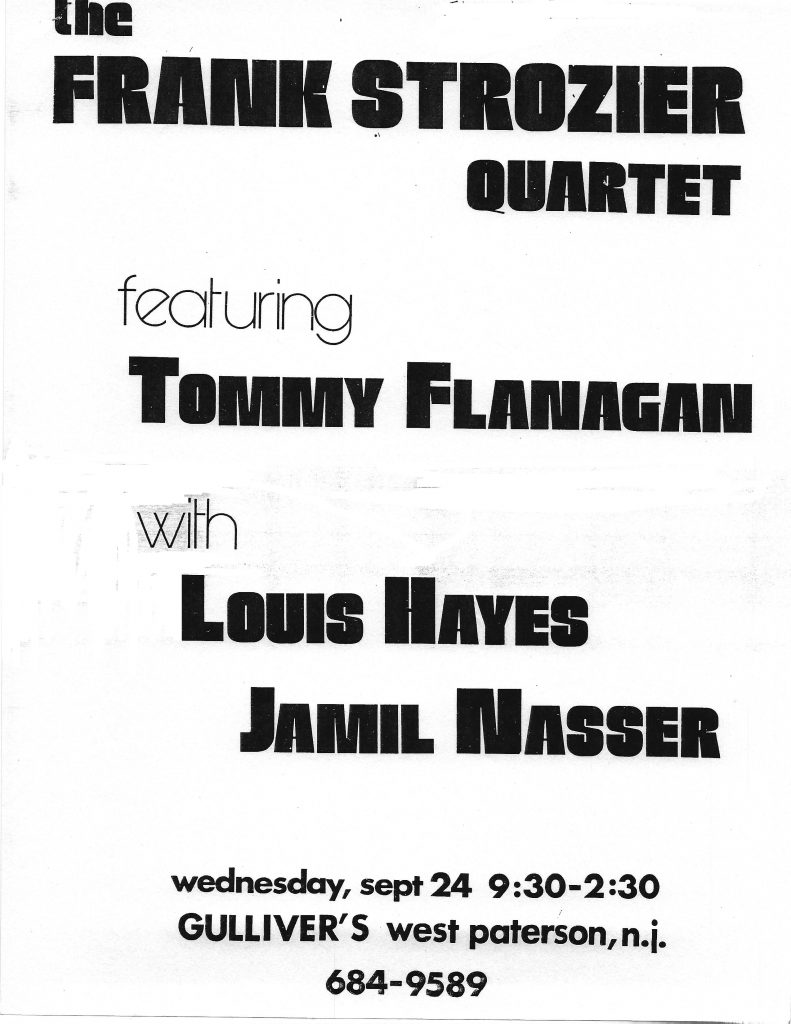 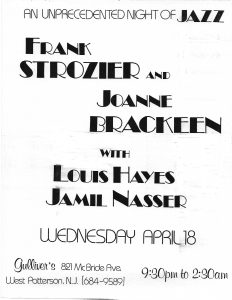 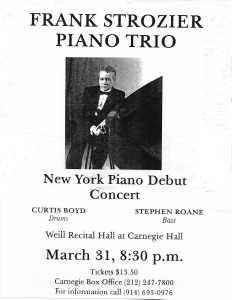 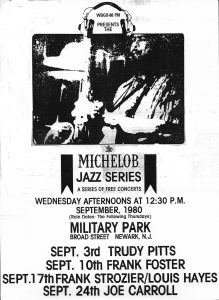 Note (December 1, 2017): Evidence points to Strozier currently residing in the state of Rhode Island. Efforts to confirm this have so far been unsuccessful, but I thank the people who have contacted me with information about his whereabouts.