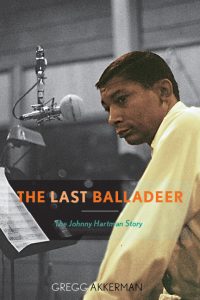 This is a collaborative effort with Gregg Akkerman, author of the excellent book on Hartman, The Last Balladeer: The Johnny Hartman Story. I highly recommend this biography to anyone interested in Hartman in particular and jazz vocalists in general.

The book contains a discography which has been converted into an online version using Steve Albin’s BRIAN software. This will be updated on a regular basis incorporating new information as it is discovered. It is my hope that the discography available here will become a useful adjunct to Akkerman’s comprehensive study.

The great vocalist Johnny Hartman (1923-1983) was raised in Chicago, Illinois and like many other jazz musicians from that city, attended Du Sable High School. Gifted with a rich and emotive baritone voice, he emerged in the late 1940s, first recording for the Regent record label. This was followed by sessions for Mercury, Apollo, RCA Victor, Bethlehem, ABC Paramount, Roost and Impulse!. Arguably, the album John Coltrane and Johnny Hartman (1963) is the highlight of Hartman’s career, 30 minutes of sheer beauty and evocative expression performed by two giants of modern jazz.

In 1980, Hartman recorded an album for Bee Hive Records, entitled Once in Every Life, that brought him posthumous fame when parts of that album were included in the soundtrack of the 1995 movie, The Bridges of Madison County.