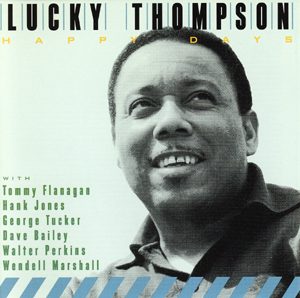 “…I feel I have only scratched the surface of what I know I am capable of doing.”
These words were uttered by saxophonist Eli “Lucky” Thompson on March 20, 1968 (1) and seem incredible in view of both the quality and quantity of the music he had produced to that point. One wonders what goals and directions he had in mind but sadly, by this time his career as a performing musician was largely over and we can only speculate as to what might have been.

Thompson has been described as enigmatic, elusive and underrated but there is no disputing his brilliance, originality and importance in the evolution of modern jazz. During his three decades on the international jazz scene, he worked and recorded with just about every giant: Louis Armstrong, Count Basie, Dizzy Gillespie, Stan Kenton, Charlie Parker, Charles Mingus and Thelonious Monk to name just a few. He transcended stylistic and geographical barriers playing in a wide variety of settings on the East and West Coasts of the U.S. and for extended periods in Europe. 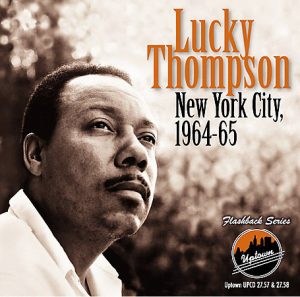 Ironically, Thompson appears on some of the seminal recordings of bebop and its successor, hard bop yet was not really a “modernist” in the sense that word was used in the 1940s and 1950s. Eschewing the direct influences of Charlie Parker and Lester Young who had provided the stylistic framework for most of the post-swing era saxophonists, Thompson instead drew on Coleman Hawkins, Ben Webster and Don Byas for his inspiration, updating those sources harmonically and rhythmically to create a unique sound and conception. His solos on tenor saxophone are compositionally assembled and emotionally evocative. When he enters, one is seduced by the sheer elegance and power of his statements into listening attentively. In the late 1950s, he added the soprano saxophone which instrument he personalized in a manner quite different from that employed contemporaneously by the much higher profile John Coltrane.

While many sources state that Thompson was born in Detroit, MI, he revealed in a 1981 interview with Christopher Kuhl (2) that his birthplace was, in fact, Columbia, SC but that his mother migrated north shortly after his birth on June 16, 1923. (3) It was in Detroit that he was raised and received his first musical training and exposure to jazz. His first recordings date from 1943 and his last took place in 1973 (possibly 1974 – see the discography). The 30 yearlong legacy Thompson has left us is a rich one, including some of the most influential and revered recordings of the music’s first century.

Like a few other musicians, most notably his contemporary Gigi Gryce, Thompson was concerned, almost to the point of obsession, with the exploitation of jazz artists and their works by entrenched and unscrupulous individuals and practices in the recording and publishing industries. He railed continually against the injustices he witnessed and after a stab at teaching in the early 1970s (Dartmouth College), his bitterness and frustration caused him to withdraw essentially completely from the limelight. He lived for a while in Savannah, GA where the Kuhl interview took place. In the early 1990s, he was discovered in the Seattle, WA area in a homeless condition, but fortunately, some kind and artistically aware local residents realized who he was and assisted him in obtaining medical attention and shelter. Thompson spent many years in a Seattle nursing home and for the most part, had refused or been unable for medical reasons to be drawn into meaningful discussions of his past experiences and achievements. Visitors, including famous former collaborators, reportedly found him bitter and paranoid; however, an interview, by Daniel Brecker in 1995, was broadcast on KCMU-FM (Seattle; now KEXP-FM) (4).

(1) Spoken introduction by Lucky Thompson issued on Candid CCD 79035 (Lord, Lord Am I Ever Gonna Know?)
(2) Lucky Thompson Interview by Christopher Kuhl, Cadence, Jan. 1982, p.10; Kuhl, Christopher, A Visit with “Lucky” Thompson, New Arts Review, Dec. 1981, p. 13
(3) Although most sources give June 16, 1924 as Thompson’s date of birth, this earlier date is the one he provided on his SS-5 form (application for Social Security number) in 1941. Census records also are consistent with 1923.
(4) For many years this interview was available on saxophonist Mel Martin’s website. Sadly, Mel Martin, a great saxophonist himself, died in 2017 and his website is no longer extant. Whether the interview or a transcript thereof has survived is unknown. Here is what Martin said about the interview: A rare and important interview with one of the most under-appreciated giants of jazz. Lucky speaks humbly and cogently about his times with Monk, Miles, Dizzy and Bird. He also alludes to why he quit playing.

Thompson’s early recordings have been well-documented through the efforts of compilers in Germany and the U.K.: