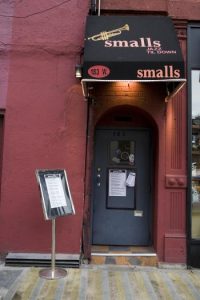 Saxophonist Chris Byars is an important member of the New York City jazz scene and besides being an excellent musician, also has a great respect for the history of this music and especially, certain artists who have not received the attention they deserve. Possessed of seemingly boundless energy and perseverance, Chris is a marvelous organizer as well. On the nights of March 22-25, 2006 (Wednesday-Saturday), he presented a fitting tribute to the saxophone giant Lucky Thompson at Smalls Jazz Club. In order for this to happen, he spent hours transcribing many of Thompson’s compositions and arrangements from recordings, a very tedious and time-consuming enterprise. Covering 1947-1973, each night featured a different ensemble and aspect of Thompson’s considerable legacy.

But not content to delve only into the known commercial recordings of Thompson, Chris also inquired as to the availability of certain German radio broadcasts from the early 1960s that he had noted in the discography. Of special interest to him was the broadcast of April 28, 1961 because the ensemble that Thompson had employed then was essentially identical to one that Chris often leads in New York City appearances. Furthermore, all of the compositions performed were Thompson’s and most had never been recorded. The problem was to find an individual or institution in possession of a recording of this particular radio show.

Fortunately, a Connecticut-based record collector, Ronald Lyles, had obtained a recording of this session and generously provided Chris with a CD-R copy. As a result, several of Thompson’s compositions were performed, most likely for the first time since the 1961 radio broadcast.

There was, however, an added historical bonus that arose from this project. Candid Records, in 1997, issued a CD “Lord, Lord, Am I Ever Gonna Know?” (CCD 79035) which contained then newly discovered quartet recordings of Thompson made in Paris in 1961. Because no information was found with the tapes, Thompson’s titles for seven of the eight tunes were unknown and thus arbitrarily assigned by the CD’s producer, Alan Bates and the author of the liner notes, Mark Gardner. When Chris auditioned the radio broadcast recording, he immediately recognized that six of the compositions were identical to those on the Candid CD. So we now have discovered the actual titles for these compositions, deemed authentic since they derive from the archives of the Norddeutscher Rundfunk (NDR – many thanks to Uwe Weiler in Germany for obtaining these documents). The equivalences are as follows:

Note: The actual title of “Beautiful Tuesday” from the CD has not yet been determined.

What we have here is a rare example of musician, record collector and discographer combining their interests to facilitate not only four nights of great music paying tribute to a major jazz figure but also an important historical discovery. Thanks Chris for having the vision and dedication to initiate and bring to fruition this significant project.

Here are the personnel and programs for the four nights of the Chris Byars Tribute to Lucky Thompson (Note: Drummer Khalil Madi, who played with Lucky Thompson at the Savoy Ballroom, made a guest appearance during the first set of the Saturday event.):