The guitarist John Leslie “Wes” Montgomery (1923-1968) represents something of a shift in emphasis for this website which, up to now, has mainly focused on artists worthy of greater recognition. One of the most influential and admired of jazz guitarists, he certainly does not fall into that category, many of his recordings achieving commercial as well as artistic success. And despite his death at the age of only 45, he recorded prolifically over a 20-year career, leaving a substantial legacy of both studio and live albums. 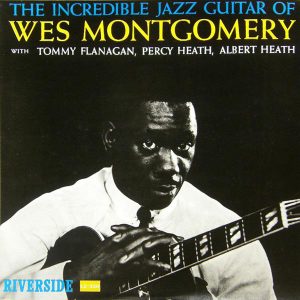 Blues drenched and rhythmically compelling, Montgomery’s approach has attracted me ever since I first heard The Incredible Jazz Guitar of Wes Montgomery in 1960. Using his right thumb rather than a pick, he generated a unique sound and almost always employed octaves in his solos. He also incorporated harmonic modifications that beautifully complemented his conception.

The brothers were all self-taught and while still in Indianapolis, joined forces with local saxophonist Alonzo “Pookie” Johnson and his brother, drummer Sonny Johnson, to form an ensemble called the Montgomery-Johnson Quintet.

But Wes’ phenomenal talent made it inevitable that he would go out on his own. The Montgomery Brothers  recorded for Pacific Jazz (produced by Richard Bock) and Riverside Records (produced by Orrin Keepnews), but by the mid-1960s, the guitarist was signed by Verve Records and then A&M, most of those sessions being produced by Creed Taylor.

In recent years, Resonance Records has unearthed and issued a number of previously unknown recordings of Wes Montgomery that help fill in gaps in his discography. Not surprisingly, these are also great listening!

For manageability, I have divided the discography into two parts: 1948-1963 and 1964-1968. Wherever possible, I have listened to the recordings listed, a time-consuming but thoroughly enjoyable process that not only allows solo information to be included but also has uncovered many errors and omissions present in other sources. It is my goal for this discography to be the definitive one and to this end, I encourage you to provide additions, corrections and comments using the contact form.

Here are some other valuable sources on Wes Montgomery: