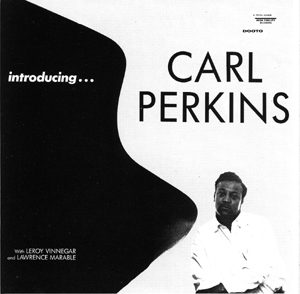 No, not the rockabilly guitarist/vocalist – rather, the exceptional but under-appreciated West Coast pianist. Carl Perkins was born in Indianapolis, IN in 1928 and eventually settled in Los Angeles in the late 1940s where he passed away in 1958, at the age of only 29. He was a classic hard bop pianist whose original technique and conception were dictated in part, by the unusual positioning of his left arm parallel to the keyboard. Despite a very short career, Perkins made a host of exceptional recordings with most of the major West Coast artists including Chet Baker, Art Pepper, Curtis Counce, Harold Land and Dexter Gordon to name just a few. His best work is concentrated in 1957, a very good year for recorded jazz in general. The large number of reissues of many of these recordings provides testimony to the high regard in which they are held.

Perkins played with a compelling swing which was sometimes reminiscent of his contemporary, Hampton Hawes. He was also a fine composer, contributing such hard bop gems as “Grooveyard,” “Mia” (“Way Cross Town”) and “Carl’s Blues.” Sadly, he recorded only one complete LP under his own name, a trio session for the Dootone label. There are known to exist privately recorded tapes of the duo of Perkins and Leroy Vinnegar at Sherry’s Piano Bar in Los Angeles and I would appreciate any information on these recordings. A review of the duo appeared in the November 28, 1957 DownBeat Magazine.