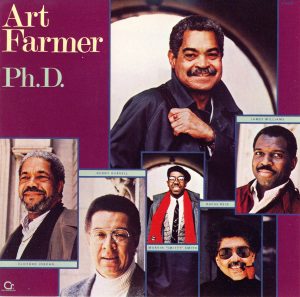 For many years I had considered compiling the discography of trumpeter, flugelhornist and flumpeter Art Farmer. One of the most lyrical of jazz soloists, he has been on my radar since I first became interested in jazz in the early 1950s. But his 50-year career and substantial recording output discouraged me from embarking upon such a seemingly overwhelming undertaking.

Earlier this year, I learned that my friend Lynne Mueller, Farmer’s companion and manager in his later years, was assembling a website in his honor and with her support and encouragement I agreed to work on his discography. There was also assistance available provided by my Gigi Gryce co-biographer Michael Fitzgerald who had already compiled a discography of the Art Farmer-Benny Golson Jazztet. Since both Mike and I were users of the BRIAN discography software, I was able to import a portion of his database into my own which avoided a considerable amount of data entry.

I am delighted to report that Farmer’s discography is now available and can be seen here. This was a major effort that includes solo information. I encourage all of you to have a look and provide comments and corrections as you see fit.